This article is taken from EREP’s 2016 budget report.

At the end of February, Chancellor George Osborne made an admission: ‘the economy is smaller than we thought in Britain’. The tone has changed since November when, following the unexpected discovery of a spare £27bn by the OBR, the Chancellor triumphantly declared, ‘our long term economic plan is working.’ As it turns out, the UK economy is around one per cent, or £18bn, smaller than the OBR predicted, leaving the Chancellor with at least £5bn in missing tax revenues this year alone, and more in future years (estimated at £9bn per year by the Institute for Fiscal Studies). There is no chance he will keep to his own misguided fiscal rule.

EREP have consistently argued that the supply-side optimism implicit in the OBR forecasts was unwarranted. We were right. Economic indicators across the board have deteriorated significantly since the November forecast. Even the service sector, the single remaining engine of the UK’s imbalanced economy, is now showing signs of mechanical failure. The Markit UK services PMI – a key indicator of activity in the services sector – fell sharply in February. There is no chance that UK growth will be 2.4% in 2016, as claimed by the Chancellor in November.

Osborne’s tax shortfall is the result of much lower than predicted wages and prices. The broadest measure of inflation, the GDP deflator, has fallen to zero, while wage growth has slowed substantially to around two per cent – the OBR had predicted wage growth of three to four per cent over the rest of this parliament.

Despite weakening wage growth, retail sales have remained strong: the most recent figures showed year-on-year spending increases in excess of two per cent. Retail sales strength has driven in part by lower prices resulting from the sharp decline in oil prices. But while households in other major economies largely saved the windfall from lower oil prices, those in the UK spent it, and more. The UK household savings ratio, at 4.4% of disposable income, is now the lowest on record. 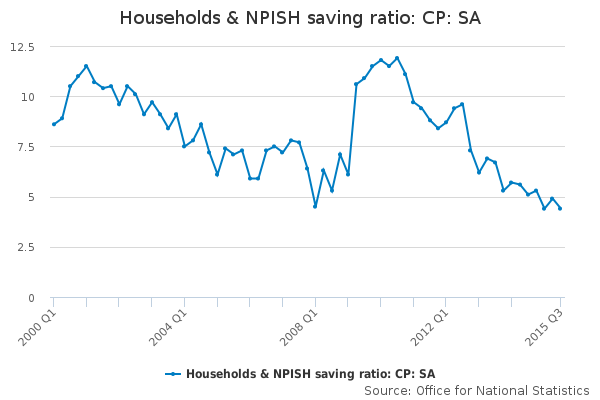 And despite weakening wage growth, the UK economy is now entirely reliant on continued household consumption spending. Contrary to Osborne’s claim that growth ‘is more balanced than in the past’, the UK trade deficit is a drag on economic activity and business investment –  which only recently regained pre-crisis levels – fell sharply in February.

How have UK households increased spending despite wages remaining well below pre-crisis levels? Unsecured consumer credit is growing at around nine per cent per annum – the fastest rate since 2005. At over 140% of disposable income, UK household debt is higher than in the US, Japan or the largest European nations. Even the optimistic and now-discredited OBR forecasts predicted the household debt-to-income ratio would need to rise to 160% by 2020 for growth to be maintained and the deficit eliminated.

A recent report by the Money Advice Service – an independent body set up by the government – reports that 8.2 million adults in the UK – one in six of the population – are over-indebted. Among poorer regions, such as the Welsh valleys, the figure rises to one in four. The problem is particularly acute among young people, those in rented accommodation and those with children.

It is exactly these groups – working families and young people – whom the Chancellor will target in the next round of austerity. In the previous Parliament, austerity was targeted at the most marginalised: the sick, the disabled and the unemployed. Since these people have least voice in society, they are unable to put up resistance. Cutting the incomes of working families will be more difficult, as Osborne’s U-turn on tax credits shows.

By reducing working peoples’ incomes, Osborne is attempting push the burden of debt onto the household sector. The strategy will fail – without wage growth, consumer spending will eventually be constrained, dampening growth and pushing Osborne’s deficit-reduction strategy yet further off track. That deficit reduction is not really the ultimate aim of Osborne’s strategy is made plain by his intention to continue cutting tax for those on higher incomes.

There is no long-term economic plan; Osborne’s strategy is one of redistribution by taking from those who least can afford it. As the latest figures show, his strategy has backfired.

The report’s authors include:

John Weeks on the Chancellor’s “Growing record in fiscal mismanagement”

Jo Michell on “A weakening economy, reliant on consumption and debt”

Information on EREP is available here.