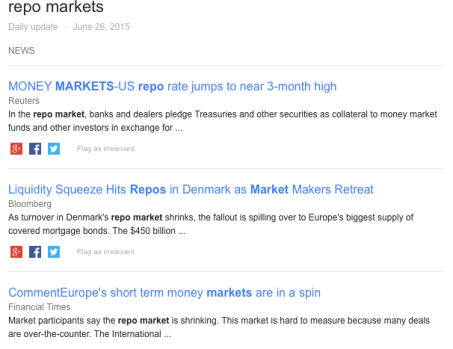 The Reuters piece looks at the US repo market. Dealers and banks there are anxious about the spillovers of the potential Greek default (remembering Lehman triggered a run in repo) and this anxiety shows in higher repo rates.

The Bloomberg article talks about the impact that the shrinking Danish repo market has on the covered bond market. Declining use of repos by banks harms liquidity in the secondary covered bond market, and threatens Danish banks’ liquidity buffers. Bloomberg cites the Danish central bank and local banks common view that regulation is discouraging\ banks’ use of repos, with unexpected consequences for the rest of the financial sector. As banks return to being more like banks (relationship based) and less like (repo) market players, financial stability suffers.

The FT piece paints a very different picture. In contrast to the US, European banks and money market funds do not seem to be concerned about the financial stability implications of the Greek negotiations. The problem in European repo markets is how to get rid of your cash – as with negative bond yields, money market funds now have others to lend cash to them. The culprit, in this story, is the ECB, who charges banks on their reserve accounts, and thus distorts short-term money markets ‘driving our traders absolutely mad’.

There are several interesting questions arising from this comparative picture:

1. How come Greek tensions manifest in US, but not European repo markets? Is it about the exposure of US to European markets, about the time horizon for tightening, or some form of inexplicable European optimism for a Greek solution ?

2. How can we account for, and separate, the impact of unconventional monetary policy  and regulation on the repo markets? Bloomberg portrays the Danish central bank as unwilling to accept its contribution to repo contraction, whereas the FT piece has traders complaining about the ECB.

This last question is fundamental given that repo markets are systemic to shadow banking. The FSB has recognised this since 2009, but its attempts to reform repos – to transform a market governed by private rules into a market governed by public rules (on haircuts) – have been watered down considerably. The European Commission and the ECB are also going down the same route, now content with simply imposing Transparency and Reporting Requirements (although some exceptions will also apply there) without trying to change margining practices that are inherently fragile. The Capital Markets Union (CMU) project also stresses that there is a trade-off between regulation and a well functioning repo market.

Thus, the argument that regulation shrinks the repo market and constrains’ banks ability to act as market makers is very useful for delaying and defeating measures to regulate the market and bring it out of the shadows. When central banks start tightening, it may come to haunt them.

3. What are the broader consequences of increasingly organising the financial system around markets and market liquidity, as the CMU aims, in turn reliant on repo markets that not even the repo lobby knows much about?