Recently, a colleague emailed with the following set of questions: ‘a balance sheet approach to defending currencies. Do you know literature that explains in detail the globally interlocking balance sheets between central banks, commercial banks and what happens when a national government has to defend its currency? What is the role of national and foreign reserves and how do they travel these balance sheets in the process of trying to defend a currency? I came back to this question when discussing the Swedish fight to defend the Dollar-pegged Krona in the early 90s and the promise of MMT? Most particularly we wondered to what extent national governments can just issue Krona and use them to buy foreign reserves or what sets the limits exactly to this attempt?’

My MMT friends do have answers to these questions (and they do spend a lot of time defending MMT from critiques that it doesnt consider balance of payment constraints to monetary sovereignty). I thought I would answer these questions a la Minsky, with balance sheets, since that’s how I teach my undegrad students about exchange rate management in emerging/developing countries. I teach by setting those questions within the broader conversations about global liquidity, global financial cycles and Rey’s dilemma – independent monetary policy is only possible if countries manage capital flows (capital controls). 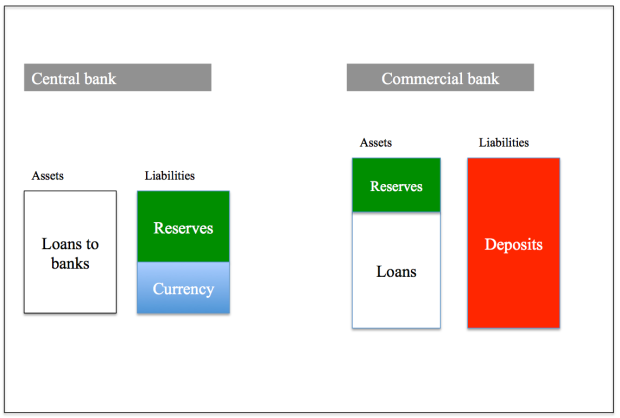 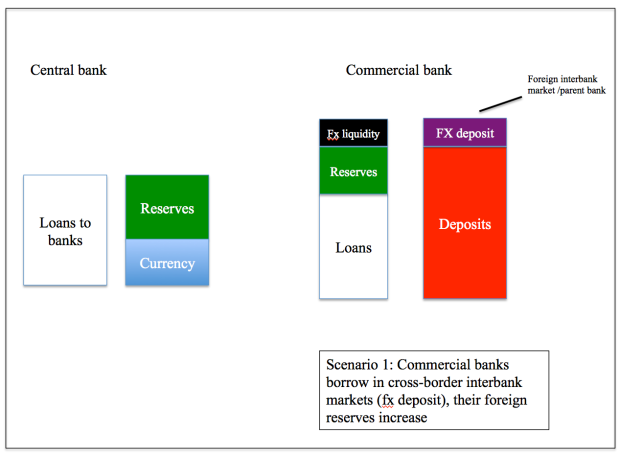 (this scenario played out in Eastern Europe before Lehman, when foreign-owned banks would borrow from parent/interbank markets – ending up with the Vienna Initiative)

2.b Commercial bank funding via fx swap with non-residents

Step 1 occurs where local banks are allowed to lend retail in foreign currency. If it looks like MMT 2.0, it is not exactly that – without legal restrictions, the only constraint on banks creating foreign money (eurodollars) is their foreign currency reserves (an exogenous money story a la monetarism).

Even with restrictions on the lending in foreign currency (skipping steps 1&2), banks typically intermediate non-resident demand for local currency bonds via fx swaps (see my paper here on growing appetite for EM securities as part of shadow banking reform agenda). This is big enough that BIS has recently proposed to approach fx swaps as missing debt. Note that this is a global liquidity story:  without capital controls, non-resident demand/bank borrowing abroad reflects funding conditions in US money markets (see Bruno and Shin’s risk taking channel of monetary policy). 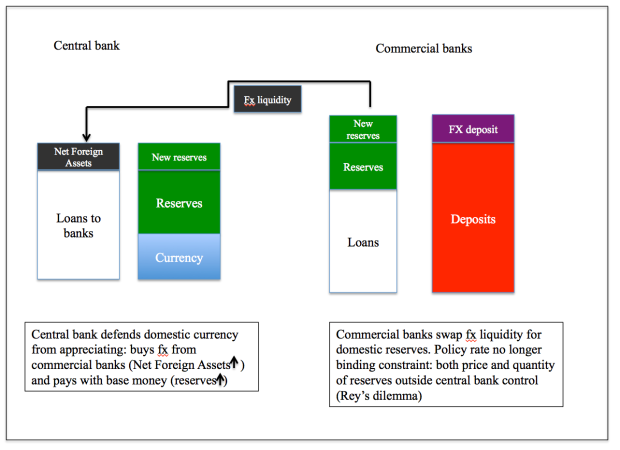 For this commercial bank, the central bank’s policy rate is no longer a binding constraint, since it obtains local base money (reserves) by selling its fx liquidity to the central bank, rather than in the local interbank money market. When interest rate differentials are significant, this eases cost of funding (in the macro literature, this is part of the debate on the effect of financial globalisation on the effectiveness of inflation targeting central banks).  It’s global liquidity, not domestic liquidity, that determines short-term money market rates.

This operation is known as sterilisation: that is, ‘sterilising’ the impact of fx market interventions on domestic money market rates. Central bank issues own securities (or sells government bonds, or takes deposits) in order to absorb back the reserves it created when it paid for the fx liquidity it bought from banks. Note here that this does not solve Rey’s dilemma, since banks have full discretion over how much to place in central bank securities. Rather, for banks this is an attractive carry – borrowing cheap abroad, placing it in risk-free local securities (banks can hedge fx risk).

If you think this is a theoretical exercise, think again. 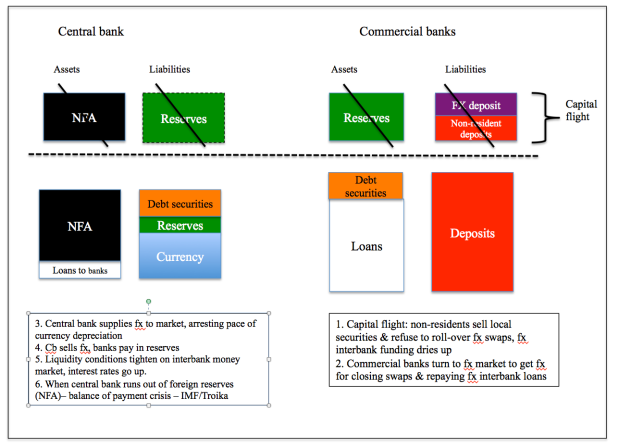 In step 1, non-residents sell local securities – potentially triggering liquidity spirals if large, unregulated local repo market exists.  Note that by step 5, local banks with no direct links to global finance also start to suffer as interbank liquidity tightens. Cant the central bank mitigate this by reverse sterilisations, that is, by again insulating fx market interventions from domestic money market dynamics? The lessons from the 1997 Asian crisis, according to the IMF, is to segment domestic money markets, that is, to prevent local banks from lending to (non-resident) speculators:

Because a speculative attack requires the establishment of a net short position in the domestic currency, countries have employed a number of tactics to raise the costs of short positions. When sterilized intervention fails to stem capital outflows, short-term interest rates are allowed to rise, tightening conditions in financial markets and making it more costly for speculators to obtain a net short position by borrowing domestic currency. Frequently, however, an increase in short-term money market rates is transmitted quickly to the rest of the economy; it may therefore be difficult to sustain for an extended period, especially if there are weaknesses in either the financial system or the nonfinancial sector. When high short-term interest rates impose an unacceptable burden on domestic residents, countries may “split” the markets for domestic currency by requesting that domestic financial institutions not lend to speculators. Foreign exchange transactions associated with trade flows, foreign direct investment, and equity investments are usually excluded from such restrictions. In essence, a two-tier system is created that prevents speculators from getting domestic credit while allowing nonspeculative domestic credit demand to be satisfied at normal market rates. (IMF 1997)

Even if the central bank successfully protects local banks  from cross-border volatility triggered by global financial cycles, it can only defend the currency to the extent that it has foreign reserves. It will most likely not wait until it runs out. In the happy scenario, it draws on its swap lines to weather capital flight – but few central banks have that luxury (and ask yourself, how many will actually have it when Donald Trump needs to be consulted on this). The worst case scenario:  IMF/Troika/whoever will lend  – with heavy conditionality.